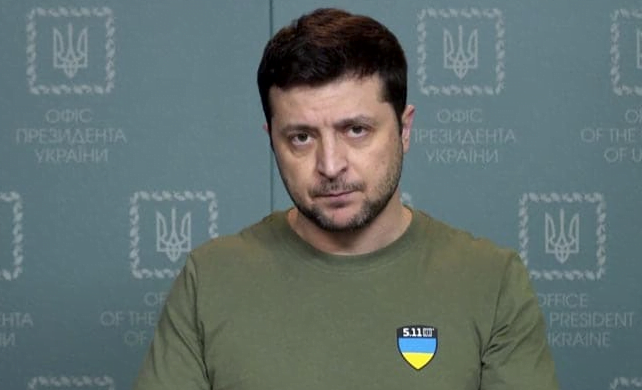 I usually try to avoid using up-to-the-minute-current events to illustrate timeless truths about leadership and change. I want my pieces to be as relevant in 10 years as they are today.

But one recent event has so clearly broadcasted a timeless truth about leadership, change and—in particular—communications, that I couldn’t resist. I’m talking about Ukranian President Volodymyr Zelenskyy, whose country—as of this writing—has been invaded by Russia.

Zelenskyy has said many things of late. He’s spoken to prime ministers, presidents, parliaments. He’s been interviewed by world media. But nothing he’s said has spoken as loudly as his actions, his determination to lead his fellow citizens by example rather than by slogan, his gutsy decision to stay in place and pilot his country from the inside. He’s not cheering his people from the sidelines. He’s in the game, on the field.

Military experts and journalists assumed he would flee to lead in exile once invaded. When the West offered him a clear path out, he reportedly said “I need ammunition, not a ride.” As a world leader, his words—as emotional as they are—are holding more weight coming from a bunker in Kyiv than if he’d traveled the world to say them.

And as a leader of people, his actions have taught resolve: Millions of civilians have stayed in-country to fight the invasion.

As leaders we may lead our teams, our peers and even our superiors through great upheavals, upheavals not as dramatic as an invasion, but upheavals nonetheless. In the moment, it’s easy for us to forget that it’s our actions—not our written and spoken words—that have the greatest meaning…and that our words can have little meaning if surrounded by the wrong actions.

Communications is 90 percent action, 10 percent words. And this is a timeless truth: As Benjamin Franklin said, “Words show a man’s wit, actions his meaning.”

So, no more executive boondoggles to Paris right after announcing giant cost cuts (true story). No reducing admins in the rest of the organization if you won’t do it yourself (true, too). No saying “y’all get with the program” if “y’all” doesn’t mean “me.” Remember: In the game, on the field.

Ten years from now, Volodymyr Zelenskyy may be U.N. secretary general and/or a Nobel laureate. He may have been killed just after I publish this piece. The war will have gone in one of a thousand possible directions. Whatever becomes of him, in this moment, at this writing, he is showing all of us the power of action—and the relative weakness of mere words—in communications and leadership…especially during change.